I was studying for a BSc in Anthropology at Brunel University when a few months before the end of my studies I spoke to one of my lecturers about internships, volunteering and jobs in the museum sector. I was looking for opportunities that would feed my interest in both archaeology and anthropology and where I could gain further experience in museums before moving onto a masters in museum studies, heritage and conservation. The lecturer suggested and put me in contact with the British Museum’s Endangered Material Knowledge Programme. The Programme provides grants to researchers and practitioners across the world to bring to light material practices and associated objects that are now in danger of disappearing, as well as endeavours to preserve the knowledge and provide a broader understanding of cultural practices and traditions. The programme offered me exactly what I was looking for – the opportunity to remain in close proximity to archaeology and anthropology and to evolve my abilities and understandings of how the museum world works.

During the volunteering, my primary task has been to formulate collections reports for new grantees. The reports are put together to inform the grantees of the relevant objects the British Museum might have as well as aid them in their research. These can then be used to inform modern practices and provide additional information on the museum objects, as well as start discussions on past uses of the object. They also help the grantees understand the area of research, the chosen material culture, and/or ethnic group from a material historical perspective. Although it is not necessary for the grantees to work with museum collections, many museums have collections relevant to each project, including at the British Museum. I have and continue to enjoy this task as it gives me a window into the process of archiving and documenting objects. The information given for each object would include basic museum and archival details such as their unique museum number, description, how to locate them, and an image of the object was also provided. Additionally, the anthropological context of the objects, found within either the detailed descriptions or Curator’s Comments, built an all-round image of the object. Using the background information provided by the grantees, I was able to prioritise the objects that would be appropriate for the report. From there I was able to go down the rabbit hole and make connections to other objects in the collection that might directly or indirectly be useful to the projects and their goals, even though the objects were not of the materials researched or directly associated with the ethnic group and practices being investigated.

One report which stood out to me was titled ‘The Social Life of Camels in Somaliland’ for Rapahel Schwere’s project ‘Burden Camels in Somaliland: Disappearing Skilled Practices and Material knowledge’.  I was excited to delve into it, as I had never explored the area or project topic. A focal point of this project was how objects of any material and type were connected to the camels of Somaliland and the surrounding regions, as well as how the camels themselves inform the social life of the region. The findings were incredibly interesting, with a large volume of objects in the British Museum being made up of camel bells (which are used to alert the owner of the camel to their whereabouts), visual representation (such as photographs, drawings, and money), and miscellaneous items used to take care of camel herds, such as troughs, and saddle cloths. This shows the practical importance of the camels to the region of Somaliland and beyond; evident in the intricacy and a large number of the camel’s adornments (trunks and necklaces). Another particular collection of objects which caught my interest during my research was an assortment of photographs depicting camel rock art in Somaliland, which pictured either carved or painted images of camels, which were in some cases surrounded by humans and other animals. Rock paintings and carvings as an artform are fascinating in themselves, as the specific motivations behind them are difficult to confirm. It further highlights the clear significance of camels to Somaliland’s social life.

Another collection report which I found particularly compelling was the most recent one I have completed for the project ‘Making things from Animals: leather technologies of the Kalahari’. It was my biggest report to date and tested my organisational and research skills. However, it also meant that I was able to really immerse myself in the research process and create a detailed report discussing a large range of objects that best contributedto the overall project goal. It became clear that leather as a material was widely used across all facets of life in Southern Africa, including in bodily adornment (such as charms), household items (like containers) and weaponry (such as sheaths and quivers). The widest variety of leather objects relevant to the project came from South Africa. I divided them into different categories to show the range of ways in which leather contributes to social life and its material manifestations in Southern Africa, while also clearly showing the object-types in which leather is used the most. Within that particular report, there was a large selection of bodily adornments such as jewellery, armlets and neck ornaments, which were beautifully intricate. For example, there was a specific necklace made of jackal teeth and a leather string, which was most likely worn by a medicine man; the symmetry and layout of the individual teeth and where they were placed created an eye-catching sight, almost resembling flowers. This juxtaposition of animal teeth resembling flowers was fascinating, as it almost feels like an optical illusion. 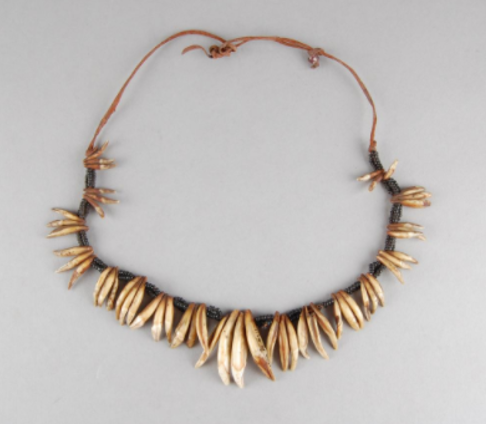 For a very recent graduate, progressing into the world of work is an intimidating prospect. Despite an awareness of the field, I encountered a lot of issues when searching for internships and jobs, which is the required experience within the sector. Despite having interned for four months at Beit Hatfutsot (The Museum of the Jewish People) in Israel and having an undergraduate degree in Anthropology, having long term and in-depth experience into your field of interest is key, not only for future employment opportunities but also to enable you to explore and scrutinise that field. Overall, my first few months with the British Museum, and specifically the EMKP programme, have been a smooth and blessed transition from the explicitly academic nature of university to the more integrated and involved world of museum work. I am keen to utilise all I have learnt so far through this volunteer placement to inform my future learning during a master’s degree in archaeology and artefact conservation combined with Museum Studies, and in my pursuit of a career in conservation, archiving and even academic writing. This volunteer placement is an amazing first step toward that end, allowing me to learn and practice research techniques, explore cataloguing of objects, and also incorporate anthropological context into objects. The future is, as always, uncertain; with the Covid-19 pandemic, subsequent closures and overwhelming fragility of the culture and arts sectors, I am increasingly apprehensive about entering the field, but I am also hopeful that with research, organisation, and experience on my part through placements like this one, I will thrive in the sector.

Lisbet Rausing, co-founder of the Arcadia fund, speaks about the importance of preserving endangered knowledge and nature, and promoting open access. »