Visual repatriation as a sustainable tool for engaging with source communities

EMKP Volunteer Rosie Croysdale writes about the use of photo elicitation and visual repatriation in the Apprehending asapan: documenting the Turkana initiation ceremony project led by Samuel Derbyshire.

In recent decades, there has been a shift in attention within anthropological and archaeological research towards understanding the role that photography can play in the cultivation of collective memory. Collective memory refers to the type of memory which is shared broadly by a group, nation or culture. This type of memory can be subtly shaped by elements of visual and material culture embedded within society. Photographs, in this respect, are excellent communication vehicles, not merely for the stories that they tell but also for their capacity to confront “museums’ earlier entanglements with the colonial project” (Derbyshire 2020, 166). Increasingly, photographs are being considered as valuable research tools for the way in which they can be exchanged and circulated, and for their ability to elicit forgotten details about the past.

Photographs taken from the 19th century onwards have an often-unrealised research potential. Their potential is demonstrated by Samuel Derbyshire, who is currently working on a 2-year EMKP project entitled Apprehending asapan: documenting the Turkana initiation ceremony. The project situates photo-elicitation and visual repatriation at the centre of an ongoing dialogue with individuals and communities from the Turkana County of northern Kenya, a region bordering with Uganda, to the west, and South Sudan and Ethiopia to the north.

The project focuses on asapan, an initiation ceremony and rite of passage practiced by the pastoral-nomadic Turkana of northern Kenya. It is a social institution that draws together a unique variety of knowledges, skills, material identities, and embodied performances in the transition to adulthood. The ceremony holds an important place in the lives of the entire population in both ritual and domestic settings. For instance, the performance of asapan is fundamental to marriage and the negotiation of land. With regard to material culture, numerous objects are required for the asapan ceremony including spears (ngakwara), wooden bowls (ngatubwae), clay pots (agulu), circular wrist knifes (ngabara), head ornaments (ngapukoto) and bundles of neck beads (ngakoroumwa). These and other objects collectively contribute to the performance of asapan, and therefore to the passage into adulthood. As part of the EMKP project he is leading, Derbyshire has been focusing, among other things, on the biographies and production of these objects as well as on their capacity to make or remake Turkana identities. 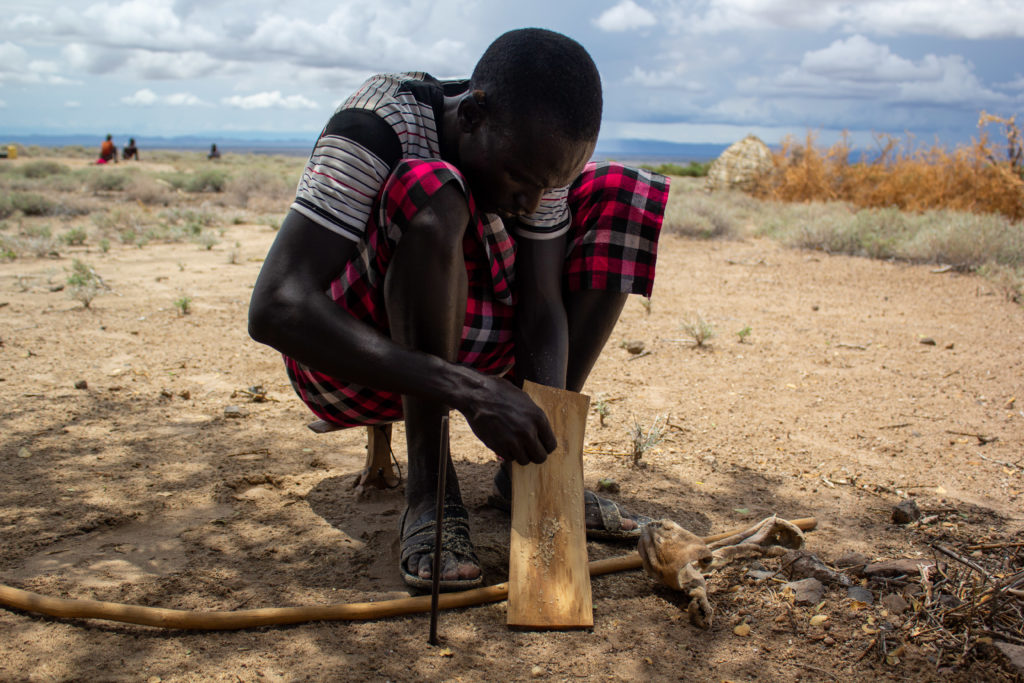 One strand of this research uses photo-elicitation to prompt discussions with Turkana individuals or communities over the material culture of asapan, which is increasingly endangered due to the volatile social and economic environment of the region. For this part of the project, Derbyshire has been using historical photographs and photographs of ethnographic objects in both the Pitt Rivers Museum and the British Museum to facilitate conversation and engagement with asapan initiates and other members of society in a broad range of settings. In doing so, his project has sought to subvert existing narratives and document multi-vocal accounts of Turkana’s past and present. 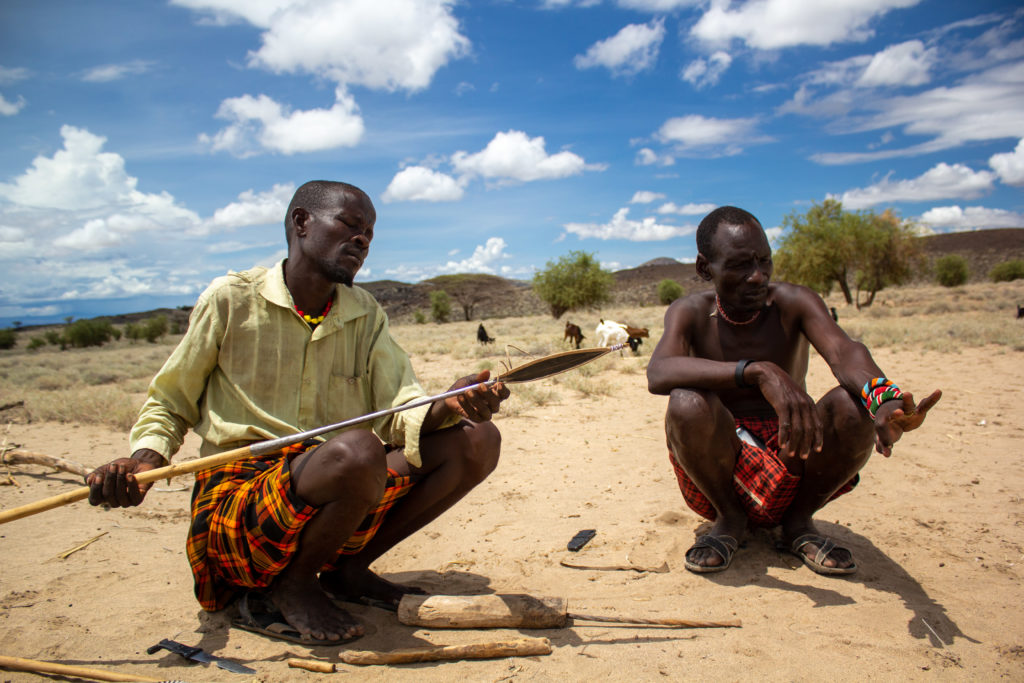 Some of the earliest images that Derbyshire has repatriated for the project were taken at the beginning of the 20th century, whilst some of the latest include his own photographs taken during previous fieldwork in the Turkana region. According to Derbyshire, through visual repatriation photographs “become tools that are used to tell neglected and suppressed histories in the locales that they pertain to – rather than simply remaining as enclosed visions of the past that are read in silence and obscurity” (2020, 166). In putting together and presenting this photographic material to Turkana individuals or communities, Derbyshire acknowledges that his choices have an influence on the narratives which emerge from the resulting conversations, since his selection and organization reflects the project’s focus on material culture. Crucially, however, he observes that this has not prevented those who view the photographs from using the images for their own purposes or for creating their own narratives.

On the one hand, conversations about these photographs have revealed understated and disappearing elements of the material heritage of Turkana’s contemporary population, such as “the shift from leopard and baboon skins to large cotton blankets in male clothing” (Derbyshire 2020, 167). On the other hand, these discussions have helped to draw out local narratives about the material, cultural and socio-economic changes that Turkana has been facing. Contradicting decades of “dehistoricizing” Western representations of the region and its people, such narratives embody and sustain personal histories in order to unveil domains of truth, perspective and process. Thus, through his fieldwork, Derbyshire hopes not just to provide a record for posterity, but also a platform through which individuals and communities from Turkana can offer their own accounts of their time, space and material culture.

Rosie Croysdale is a BSc Anthropology student at University College London (UCL). She recently finished her dissertation on Uneathing the archive and confronting the institution: Can notions of the ‘ethnographic’ and ‘anthropological data’ be used to decolonise museum practice?