From Seeds to Rags: Textile Production in Dendi and Borgou (North Benin)

Home » From Seeds to Rags: Textile Production in Dendi and Borgou (North Benin)

The project aims primarily at documenting cotton cloth production in North Benin, from cotton growing activities to thread production (ginning, carding, spinning), weaving on a vertical loom, indigo dyeing, and sewing. One of the target areas is the Dendi (along the southern bank of the Niger River) where technical knowledge is especially endangered. For documentary and comparative purposes, fieldwork will also be carried out further south, in Borgou –the second target area–, where parts of the whole textile production sequence still survive.

In line with cultural technology, as much attention will be paid to the components of technical processes (tools, materials, recipes, gestures, locations, etc.), as to the finished products (cloth and garments) and the social world of activity (set of relations between persons acting and between the social and material worlds). 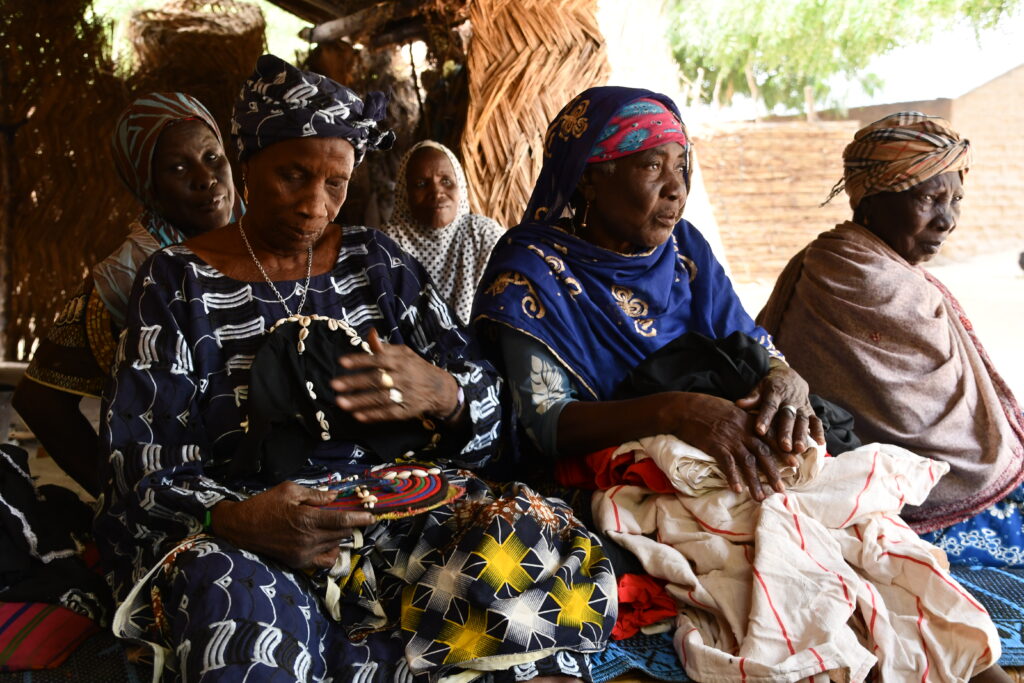 Tombouttou village, Dendi. During an interview devoted to the use of fabrics, several women bring loincloths or items of clothing that they keep carefully in their rooms. The interview reveals the links between these fabrics and ganji, the possession spirits. Indeed, the loincloths – whose colours vary according to the ganji concerned – are worn during possession ceremonies, but they can also be used as a support to address prayers to the ganji outside ceremonial contexts. (Photo: Olivier Gosselain).

Data collection will combine direct technical observations when possible, a recording of the last material remains of the textile sector (raw materials, tools, abandoned workshops, finished product), filmed interviews of practitioners at home (in which technical memories interweave speech, gestures and objects), and filmed interviews in a mini outdoor studio focusing on biographical narrations and specific gestures or objects.

The main outcomes will be threefold: (1) producing visual, audio- visual and documentary materials for the EMKP repository; (2) meeting local demands for the preservation and transmission of knowledge associated to textile production; (3) advancing our methodological reflections on the historical exploitation of technical processes and the detailed documentation of techniques that have ceased to exist.

Documenting the ‘made world’ and endangered knowledge »